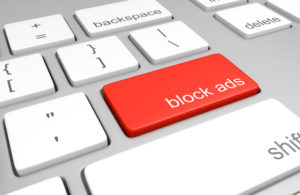 Ad blocking has become an ever-popular feature when it comes to people searching the Internet, especially on their mobile devices. In June 2015, there were just under 200 million monthly users of ad blocking technology. This can have a significant impact on your business’ PPC campaigns.

What is Ad Blocking

Ad blockers, sometimes known as content blockers, are software programs that stop ads from being displayed on a website. Generally speaking, ad blockers are browser add-ons. There are different ones for each web browser.

There are dozens of ad blocking options to choose from. The most popular is AdBlock Plus, but there are others offered by both large and small companies.

The Implications of Ad Blocking for Paid Search

The problem is that ad blocking prevents a mainstream of income for many websites. If you have a PPC campaign, then it is likely that some of your potential customers will not be viewing your ad, and this can have a significant impact on your revenue.

To make matters worse, when ads do not show to your audience, according to Google and Bing, they are still considered impressions. Therefore, the first change you should make is to ensure you aren’t on a pay-per-impression campaign, but rather a pay-per-click (PPC).

However, there is one advantage. Programs like AdBlocker Pro have a whitelist of ads it allows to be displayed. Getting your ads on this list means that you can be one of a select few companies shown, and this could increase your chance of a conversion.

Another consideration with ad blocking software is that ads native to the site are not affected. For instance, sites like Facebook and Twitter, where sponsored posts are used with a PPC structure, are not blocked. Also, sites that run their advertising campaigns are free to display ads.

All in all, there is a potential economic cost to Google and other PPC platforms. Research is divided on how much this is, but the figures are considered to be:

The most significant use of ad blockers is on mobile devices. This is because mobile web surfing is typically slow, and the displaying of ads on a site painfully slows down the load time for the user. When ads are blocked, the effect can be as much as a page loading four times faster. So, if you are targeting users on an iPhone or another mobile device, you are more likely to be affected than someone who just targets desktop users.

That doesn’t mean that you are entirely out of luck. In 2013, there were 6.8 billion phones in the world and two billion personal computers. With only 200 million monthly ad block programs run on both mobile and personal computers, you are still looking at a 78-95% reach.

One of the tactics you can use to improve your returns on PPC is to have a complete sales cycle. That is one that includes PPC and other marketing channels to increase the chance of qualified prospects entering your sales funnel and moving successfully down it.

Another tactic would be to make more use of Google Retargeting. This is a program where a cookie is placed on a website visitor’s device that signals to Google to display your ad when they visit another site that is part of their advertising network.

This can be an easy solution that can yield significant returns in the long term.

Ad blocking is here. People want to use it, but not everyone is. It will affect your PPC campaigns, but there are also actions you can take to mitigate the impact of your brand. You just have to look at new channels to support your primary PPC campaigns.